The 24th September is the birthday of Dr Edward Bach who discovered the Bach Flower Remedies. We thought it would be the perfect opportunity to celebrate his extraordinary life and legacy.

Dr Bach was a visionary whose ideas were way ahead of his time. Back in the 1920s and 1930s he was researching the link between gut health and emotions, the importance of nature for wellbeing, how the mind affects the physical body, and how our Souls guide us to live in harmony with our true spiritual nature. These ideas are still on the edge of collective consciousness but are certainly more mainstream than they were 100 years ago when Dr Bach was writing. Like all visionaries, Dr Bach birthed ideas that mainstream society wasn’t ready to accept during his lifetime. However, his writings planted seeds which have blossomed over the last 100 years and have had a significant impact on the evolution of human consciousness. 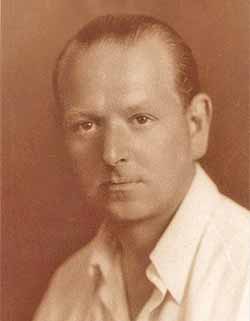 A pioneering medical doctor and researcher, Dr Bach was passionate about finding simple, gentle, natural and effective ways to help his patients. In his early research, he had discovered a link between intestinal bacteria and personality types. He found that people with similar personalities had similar intestinal bacteria and had great success treating people with vaccines made from intestinal bacteria. When he was working as a pathologist and bacteriologist at the London Homeopathic Hospital, Dr Bach was inspired by how homeopathy uses remedies made from nature chosen as a result of detailed observation of the patient’s personality.

The Mind Body Link in Health

At a dinner party Dr Bach observed the guests and reached the conclusion that every person has a particular personality type. In illness, their subsequent response to treatment is linked to their personality not the disease itself. In his medical practice, he observed that people with similar personalities would respond to similar treatment. This was different from the conventional belief that people with similar symptoms would respond to similar treatment.

He became convinced that the temperament of the patient is the most significant factor in treating disease and that nature contains the vibrations to bring people back into balance once again.

One of his most famous quotes sums up the main principle of his work: ‘Treat the patient, according to the mood, according to the character, the individuality and you cannot go wrong. Take no notice of the disease, think only of the outlook on life of the one in distress. The mind is the most sensitive part of our bodies, and hence the best guide to tell us what remedy is required.’

The Quest to Find Natural Remedies

He turned to nature to find gentle, natural remedies that could bring unbalanced thoughts and emotions back into balance again. This, he felt, was the key to restoring health and wellbeing to the mind, body and spirit. He wrote: ‘Healing with the clean, pure, beautiful agents of nature is surely the one method of all which appeals to most of us.’

In 1928, Dr Bach discovered the first of what would become the Bach Flower Remedies and initially made them as homeopathic remedies: impatiens, mimulus, clematis. He soon abandoned all other treatments in favour of prescribing his three new remedies, and he successfully treated previously incurable patients with these remedies. He said that ‘Health depends on being in harmony with our souls’ and he believed that connection with nature was essential for our souls to feel at peace.

By 1930, he was so convinced that he would find the healing remedies he sought for his patients in nature that he turned his back on conventional medicine altogether. He closed his London medical practice and laboratory and headed to the countryside seeking plants to correspond with the personality states he had observed in his patients. ‘Nature patiently waits, and we have only to turn back to her to find relief from our suffering’ he wrote. 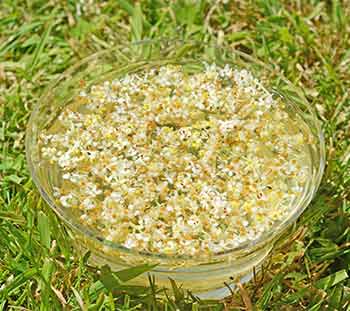 Dr Bach’s rejection of conventional medicine marked him turning away from the scientific academic paradigm that seeks to understand the world through the mind’s quest for knowledge. Instead he chose to follow his intuition to discover nature’s wisdom and listen to his inner knowing. This theme of listening to our inner knowing and restoring our connection to nature is just as significant now as it was then, perhaps even more so.

His intuitive connection to nature guided him to simplify the process for making essences. He had observed dew on the petals of flowers one morning and discovered that the dew had a strong vibrational frequency. He replicated nature by placing flowers in a bowl of water on a sunny day and this became the sun method which he used to make the first essences he discovered. Later on he would develop the boiling method, a technique where plant material is boiled in water to make the essences. We continue to use both methods when making Bach Flower Remedies according to Bach’s instructions.

In August 1930, Dr Bach settled in Cromer, a seaside town on the Norfolk coast. He spent many hours walking and contemplating in the fields, meadows, woodlands, salt marsh and beaches of this gentle landscape. Norfolk is where Crystal Herbs is based so we feel very close to Dr Bach, making essences from the same local hedgerow plants and trees that inspired him. The land is very flat here which means the skies stretch for miles so the eye is regularly drawn upwards to wonder at the vastness of the universe. The sunrises and sunsets are breath-taking and it’s a landscape that evokes inner stillness and awe so it’s not surprising that Bach’s spiritual understandings accelerated when he settled in Norfolk. He wrote that ‘All true knowledge comes only from within ourselves, in silent communication with our own Soul.’ 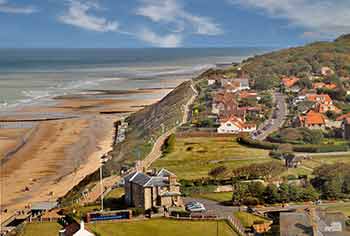 During his time in Norfolk, Dr Bach’s body, senses and intuition became his new laboratory as he tested out the effects of the plants on himself before giving them to his patients. He was publishing information about holistic healing and spirituality at the same time as he was discovering the essences themselves. In 1934, he moved to Mount Vernon in Oxfordshire and completed the discovery of his 38 Bach Flower Remedies.

Dr Bach’s writings weave a deep appreciation for nature with profound understandings about the spiritual dimension of life. He believed that ‘We each have a Divine mission in this world, and our souls use our minds and bodies as instruments to do this work, so that when all three are working in unison the result is perfect health and perfect happiness.’

Dr Bach worked tirelessly to share his understandings and essences with the world but his life was relatively short. Edward Bach died on 27th November 1936 at the age of 50, leaving his work in the hands of trusted friends and colleagues. The epitaph on his gravestone reads: “Behold, I am alive forevermore.” and, indeed, his legacy lives on through the essences he gave to the world and the spiritual philosophy expressed in his writings. 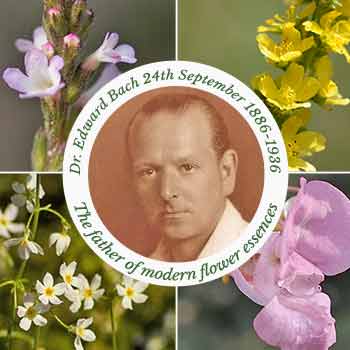 Now, 85 years after his death, Dr Bach’s philosophy is as inspirational and relevant as it was at the time. He recognised the interconnectedness of mind, body and soul, understood the importance of being in right relationship with the natural world, and knew that the spiritual dimension to life is essential for our wellbeing. He said that: ‘The whole essence of life is to know our Divinity’ and he believed that flower essences would help us to remember this truth about who we really are.

Crystal Herbs is a specialist Flower Essence producer and we’re passionate about all aspects of Vibrational Essences. We have been making and selling our range of Essences for nearly 30 years and have customers all over the world. All of our essences are handmade with love & care and alongside the Essences that we offer we also provide help, support and information about vibrational Essences. Crystal Herbs is run by Catherine Keattch and Sam Cremnitz, along with a dedicated team who are all trained practitioners and healers in their own right. More About Crystal Herbs | Contact Us

28 October, 2010 Crystal Herbs 1
Positive Vibrations – Cleansing Negativity In this months essence review we have chosen to feature one of our new Pure Vibrations Spray combinations, partly because we have found it to be such a wonderfully versatile […]

4 September, 2009 Crystal Herbs 0
It is clear that the more we can stay in our hearts the easier we will find it to engage with the waves of love that we will be experiencing this month. However, as wonderful […]